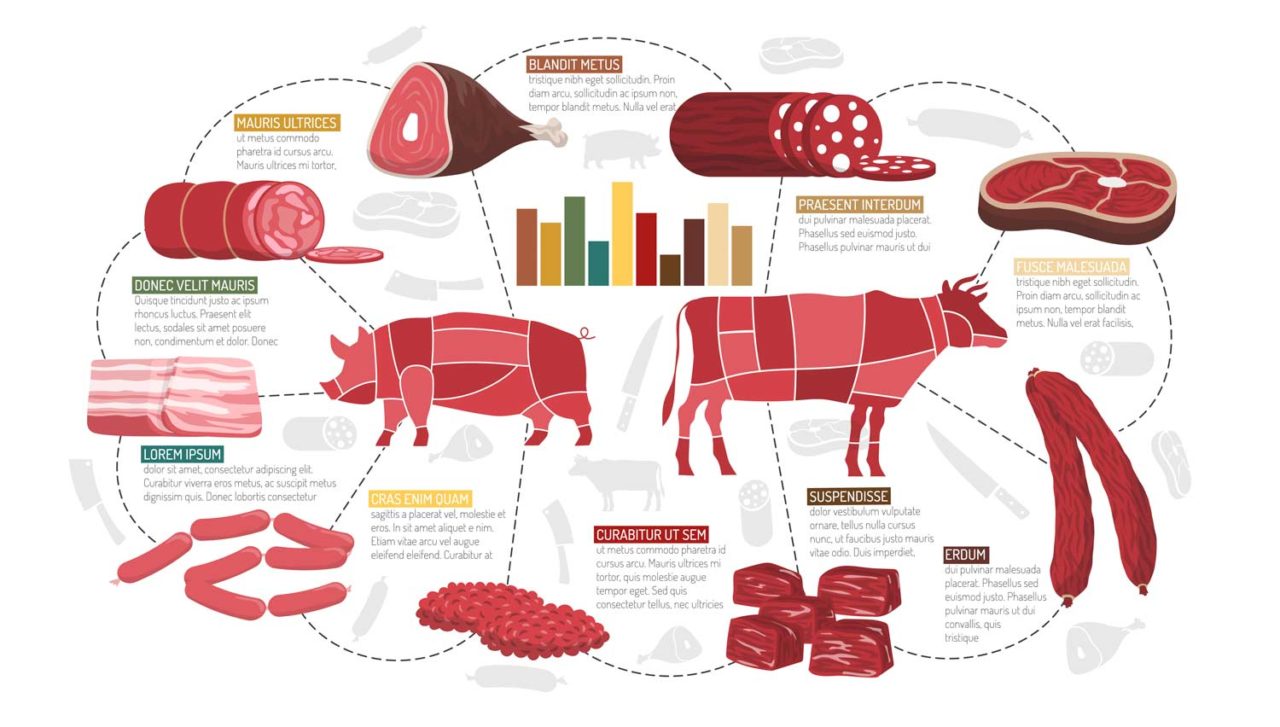 Unless you’re vegetarian, the beef market affects you, but you may not know much about how meat arrives at your local supermarket. Just four meat packers – Cargill, Tyson Foods, JBS, and National Beef Packing (the Big Four) – control 80% of the meat market in the United States. Though their monopolistic behavior extends to pork and chicken, this article focuses on the beef sector. Beef prices in stores are high, and consumers may not realize that those high prices don’t make it back to the farmers and ranchers producing the animals.

A beef animal’s life generally starts on what is called a cow-calf operation, generally known as ranches. Ranchers make sure that the young calves are receiving milk from their mothers, are protected from predators, and as they age, make sure that the calves are kept in good health. Calves are weaned and fed or sold at about 6-8 months of age. Calves then, generally, head to a feedlot sometime between weaning and the time they are a year old until they are about 18 months old, when they are sent to a processor. Cow-calf operators face a multitude of choices and every one affects their bottom line.

There are approximately 12,000 cow-calf operations, producing 790,000 calves, in Colorado alone, and the majority of that beef arrives at the supermarket through the Big Four. The disproportionate number of packers to producers allows packers to dictate prices and manipulate the market. So while consumers are paying between $5 to $6 per pound for hamburger at the store, cow-calf operators are receiving just $1.64 per pound. The power imbalance has been exacerbated by recent legislation allowing importation of live cattle into the US market. This legislation has almost certainly been impacted by political contributions.

For instance, JBS, formerly Swift, contributed $125,500 to US federal political office holders in 2019-2020, with Republicans receiving just over 85% of those dollars and Democrats receiving just under 15%. According to Open Secrets, in the House, Colorado congressman Ken Buck received the second highest amount from JBS, $8,000, while Lauren Boebert received $1,000. In the Senate, former Colorado Senator Cory Gardner received $7,000. This price must seem like a bargain to JBS to keep control of the marketplace. According to their website, worldwide, JBS has the ability to process 200,000 cattle every week. It’s almost insulting how little they are able to pay to keep control of the market through political contributions; imagine how much more it would cost them if the price they pay to producers would increase by just ten cents per pound. For producers, the extra $100 for a 1,000 lb animal would really help the bottom line and would cause the decision-making process to become a lot less stressful.

The federal government has recently paid more attention to this issue. Supply chain issues at the start of the COVID pandemic illuminated the fragility of the nation’s food security. In particular, consumers were horrified at the senseless loss of animal life when market hogs were killed and left to rot rather than be moved to holding when processing plants were shut down due to COVID outbreaks. Meanwhile, supermarket shelves were empty. The current formula shortage crisis similarly shows just how dangerous it is for American consumers to have to rely on a limited number of suppliers for a necessity.

Diversification and use of antitrust legislation is necessary to fix these problems for both consumers and farmers. Changing food safety laws to enable small processors to package beef for sale later would aid in a producer’s ability to sell beef to people who cannot buy and store large quantities. Current food safety laws require that a USDA meat inspector be present if the meat is to be sold after it is packaged. This makes it difficult for farmers to sell beef privately, necessitating that they market to the Big Four. Consumers who buy beef privately are often asked to buy as much as half of an animal. The buyer must have the financial means to buy many pounds at once as well as space to store the beef in a large freezer. We should give small packers a way to meet the inspection requirement with government grants or through alternative means of inspection.

Some producers have received governmental funding to start cooperative processing plants which are able to compete in the same marketplace as the Big Four. Many producers would like to see mandatory country of origin labeling (COOL) requirements for beef, indicating where the animal was born and raised, not just where it was processed. Chuck Grassley (R-Iowa) and Jon Tester (D-Montana) have received some support for a bill that would require the major beef processors to be more open about market prices and the private contracts they enter.

The livestock industry is a vital part of Colorado’s economy, contributing $5.14 billion to cash receipts in 2020. We must demand that our elected officials support this vital sector and find ways to help ranchers get more of their fair share. Cities and rural towns alike depend on them as a part of what makes Colorado a great place to live and work.

Emma Locke serves on Ike McCorkle’s Policy and Platform advisor team. As a great-granddaughter of homesteaders who survived the Dust Bowl in Baca County, Emma is passionate about agriculture and conservation on Colorado’s eastern plains. Emma has a Ph.D. in horticulture from North Carolina State University. Emma and her husband, Jeremy Yoder, recently bought a small farm in Wiley. Their goals are to produce and preserve fruits and vegetables from the garden, and have enough eggs, goat milk, pork, and lamb for their personal consumption. In addition, Emma grows a small number of onions for her job as an onion breeder.

previous
New Agriculture policy is live!
next
Not Just Dirt - Soil as a Carbon Sink